In Conversation with Anand B Pillai, Founder of BangPypers, one of India’s earliest programming language communities

In this interview, Anand shared how he started one of India's earliest programming language communities

Anand Pillai has been programming since his college days, He graduated from IIT Madras in 1998. In his college, he encountered open-source in the form of RedHat Linux when it was released in 1994 1995 and they got a version installed in the common hostel PC. He started BangPypers, a python programming user group in Bangalore in 2005. Discussions in BangPypers led to the first PyCon India in 2009.

Anand is a fellow of the Python Software Foundation. He has authored a book “Software Architecture with Python” which you find on Amazon.

Read this interview to learn more about how hacker culture was in India back during the late 1990s and 2000s and how BangPypers came into being and of course to know more about Anand.

Anand, tell me about your current job.

Currently, I am working for a startup called Zoko, which helps businesses to grow using WhatsApp and to scale up using conversational commerce. I architect backend systems for Zoko and also write a lot of code, mostly in Golang and some in Python. We are a team of around 8 people at present.

What’s the history of BangPypers?

During 2002-2003, I was working for a software company in Bangalore, programming mostly in C++. C++ is a fine language, but of course, the entire development/compile/build cycle is very verbose. I wanted to learn another rather lightweight language. I tried Perl for a while but did not like it a lot. Around October 2002, I came across someone mentioning “Python” in a blog online and started learning it. I took a liking to Python.

I used to get doubts in Python when working on some hobby projects but in those days there were not too many resources like today to find answers and resolve doubts. One place was Usenet newsgroups - with programming language based groups like comp.lang.python (abbreviated as c.l.py). I used to post questions to c.l.py and often got trolled for some (rather stupid) questions but I kept my involvement active.

I started writing some python software, one of the earliest software I started working on was the web crawler, HarvestMan. Writing HarvestMan kind of changed my life since I learned how to write open-source software and how to interact with people and take feedback online. Once Harvestman started maturing, I started posting its release notes in c.l.py.ann. HarvestMan also exposed me to a much larger world of coding as a few of its users online started using it for their own open-source projects. It got installed in a few computer science labs of universities and I later got involved with one of them in a big way later - the computer science department of the University of Agder, Norway.

I was meeting people online till then, I don’t know directly anybody who was working on Python in Bangalore. By Nov 2004 I started searching for communities that do meetups in Bangalore. I found Linux Bangalore which was active, and I didn’t find any active Python programming language community. There were a few early groups on the (then new) meetup.com website but none of them were very active.

By mid-January 2005, my thoughts were like “If a group does not exist, why not be the first mover and take the initiative to create one ?” With this in mind, I started emailing online communities about setting up a Python user group in Bangalore. I remember sending email to the Linux Bangalore list and even a few Perl/PHP community lists. The idea was to get people involved from similar communities and to seed a Python user group.

I setup a meeting at the hotel called 13th floor (Ebony) at MG Road at 7.30 pm on Jan 22nd, 2005 (if I remember right). I was apprehensive if anyone would turn up but the response was tremendous and around 20-25 people turned up for this seed meeting. We had a great discussion and for the first time in my life, I met fellow Pythonistas in Bangalore - many of whom had similar ideas and were kind of ready to do something together. We discussed a lot of ideas during the meeting. One of which was to setup a mailing list. There were a few engineers from ThoughtWorks who attended and they agreed to generously host the meetings of the group on their premises. I guess the idea of a Python community was ripe and the meeting formed the spark - BangPypers was thus born.

I created a mailing list for the group in Yahoo! Groups. The response was tremendous. In the first month, we had 450 emails on our mailing list. I believe I tapped into an undiscovered potential. Since then, we started meeting approximately every 3rd Saturday. 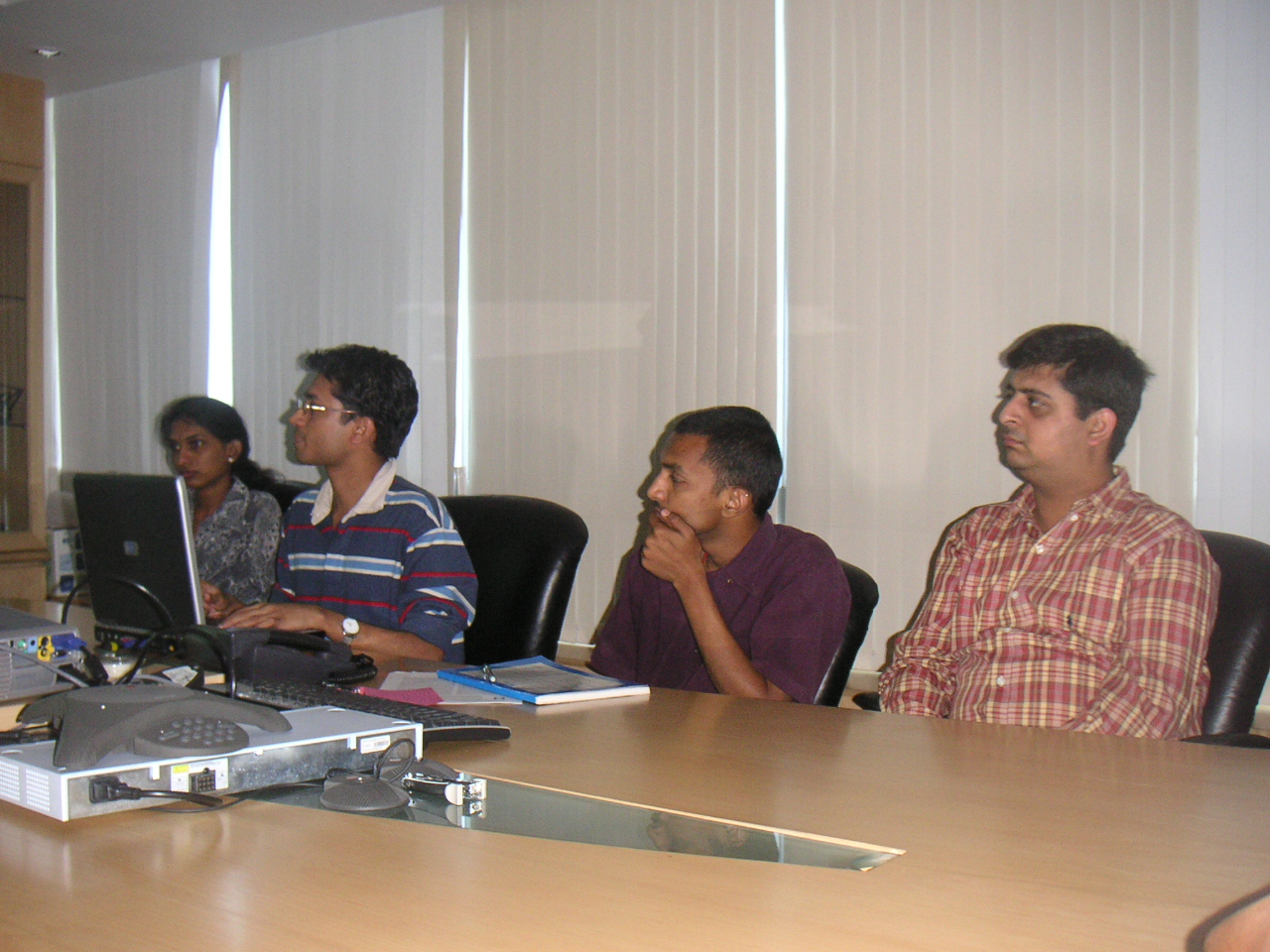 I used to call for, manage, and organize these meetings in the initial days for the next 3 years. ThoughtWorks hosted most of the meetups and Yahoo as well. I remember we used to have people flying in from Hyderabad to attend these meetings! Clearly, BangPypers had struck a chord.

The group met almost continuously from 2005 to mid-2008. In September 2007, I moved the group from Yahoo groups to python.org Mailman where it is still hosted. Then came the [discussions in the group] in 2009 which led to the first PyCon India. The rest as they say is history.

I need to mention here a few words about the group’s revival in 2012. By then the group was a bit dormant as most of the activity had shifted to the organization of PyCon India. Kracekumar Ramaraju, Sivasubramaniam Arunachalam, and a few others revived the group in 2012, establishing the current python.org.in websites, reviving the meetup site, organizing the GitHub projects, and also activating the social profiles - on Twitter, Youtube, etc. They also regularly started organizing the group meetings and video recording the talks.

My experience with “hacking” - which I define here as working with open-source code and trying to fix bugs/add new features - was from when I started writing HarvestMan and getting feedback for my code online. If I had not bothered with Python I believe I might be just another guy working in any company and would not have contributed to open-source.

We didn’t have the exposure to programming like what the current young generation has because of all the conferences and hackathons, it was not there at that time. There was no established hacker culture in India. Most of the “hacker” mentality was associated with operating systems and communities around it - where Linux played a big role. The best example is the communities that developed around Linux in Bangalore and Delhi. Also, there were very strong regional groups in Kerala. There is Swatantra Malayalam Computing (SMC) an Indian language technology developer community started in 2002 by Anivar Aravind and others in Kerala.

In colleges, more importance was given to cultural events during those days. I believe the word “hackathon” was not yet invented at that time. Coding was mostly something some people did for fun but most did it for/after getting a software job. As a student at IIT, I had the advantage of getting early exposure to Linux (within months after it was made as a distribution by RedHat) and also to the Internet and happenings there-in. However, I did most of my coding in my early years (1998-2002) as part of my job.

What is the main problem faced by student developers in India?

Every student has their circles, if someone in that circle is learning something then everyone starts learning the same. Students tend to stick to their network which I call as the “network effect”. The network effect works well for you if someone or a few people in your network are part of larger networks - so your involvement grows from the small, college-based network to a larger network - like say BangPypers or PyCon India communities. You end up going to conferences and hackathons, meeting senior developers, and making connections that allow you to expand the horizons of your knowledge as well as may help you land jobs or new careers.

The main problem is the lack of awareness and information about FOSS and how the entire free software and open-source ecosystem works.

AFAIK there are no regular programs in 3rd and 4th tier engineering colleges where open-source developers and contributors can come and talk about open-source. Hence a lot of students graduate from these places with a vague idea of the developer ecosystem around them. They may get dragged to or trapped in proprietary platforms without an idea about how the larger FOSS community builds software and feed off each other’s efforts. A classic example I like to mention is how the entire Python scientific software builds on top of just a few core libraries like NumPy, Scipy, Pandas, and Matplotlib.

If one can organize educational activities in these colleges where senior members of the FOSS community can come and talk to them and make them aware of the larger FOSS communities around them I believe they will make better career choices that will empower them in a much better way to face the future. 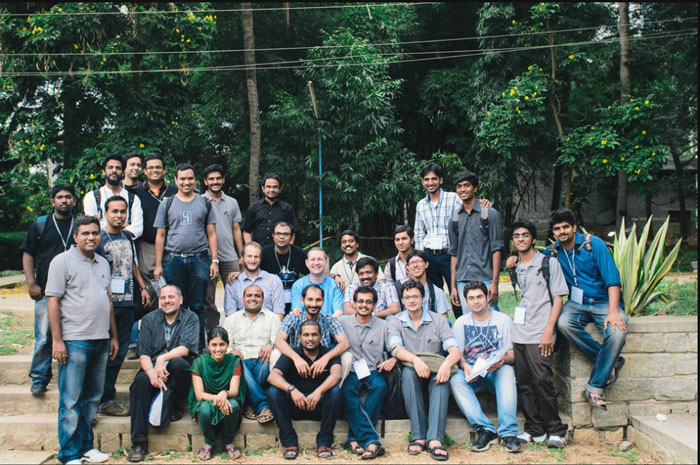 Thank you for reading this interview. Anand along with the initial BangPypers community definitely has a major contribution to the strong python community we see in India today.

If you are a developer and reading this, I hope this interview has helped you to understand why community matters.

FOSS United aims to promote and strengthen the FOSS ecosystem in India. We aim to build and help to build FOSS in India. If you are a part of the software developer ecosystem in India - I am inviting you to join our upcoming monthly meetups. We meet on 2nd Saturdays every month at 2 PM online. Join our Telegram community and forum to be part of FOSS discussions happening at FOSS United.

Also check out the last Interview - In conversation with Pranav Raj S, Author of Chatwoot

Thanks Vinayak Hegde for pointing the factual accuracy in the RedHat Linux realease. 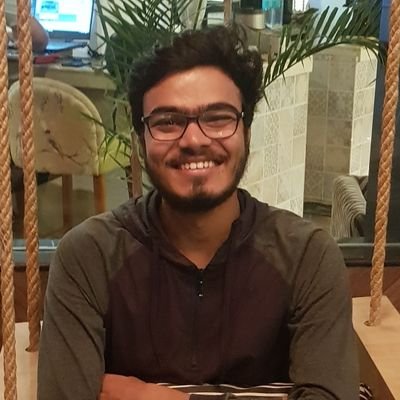